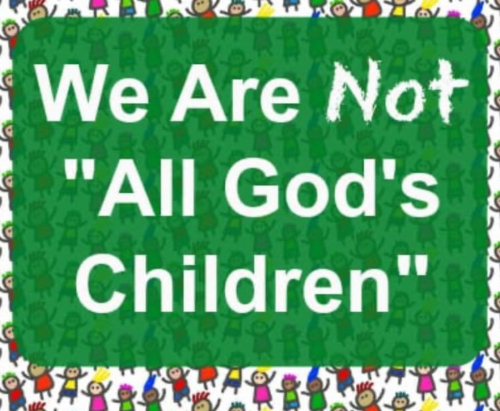 The greatest misconception is that doing good is all that’s required to go to heaven. That’s a lie from the pit of hell by Satan! And if you believe that lie you WILL see hell. For if that were true, there would be no reason for Jesus to come into the world and to give his life as a sacrifice.
God paid the greatest price by leaving His glory, to put on skin, to then walk and live amongst men whose hearts were so far away from God that they could not see who He was. They were so offended by Jesus that they had their long awaited “Messiah” killed.

It’s interesting that the name “Israel” means “wrestles with God.” The Jewish leaders not only wrestled spiritually with Jesus, they exposed themselves for the imposters they were towards God. The father they served is a murderer, so that’s why it was easy for them to have Jesus killed. For the God of Israel was not their God, and Jesus exposed them for who they truly served by His presence, which they hated.

Jesus told them, “You are of your father the devil, and the desires of your father you want to do. He was a murderer from the beginning, and does not stand in the truth, because there is no truth in him. When he speaks a lie, he speaks from his own resources, for he is a liar and the father of it.” (John 8:44)

Today by Jesus death and resurrection, He is the DOOR in which Salvation and heaven is obtained. Praise God! Since then, those the Father brings to Christ, who actually follow HIM, will be the ones to walk through that door into Paradise after death.

There are two types of children in the world today, and during our lifetime, we are given the free-will to chose which one we will be.

Whatever you hear over the social media, or from what is “assumed” by those not following the Lord, the Bible clearly says that we are NOT ALL God’s children. That’s a lie to make us all believe that everyone will live happily ever after in Heaven with God The Father. Jesus clearly said “You are of your father the devil, and the desires of your father you want to do.” (John‬ ‭8:44‬). Those who reject Christ like the Pharisees, follow Satan.
(I will note that not all the Pharisees saw Jesus as a threat. There were some who researched the Scriptures about the Messiah, who the Father then opened their spiritual eyes to see that Jesus was indeed, The Messiah.)

Jesus said:
“Not everyone who says to Me, ‘Lord, Lord,’ shall enter the kingdom of heaven, but he who does the will of My Father in heaven.” (Matthew 7:21)

Your choice will determine what child you are today, and which father you will spend eternity with after you die.

Posted at 04:38 AM in Life, Religious Deception | Permalink