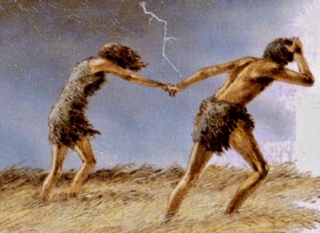 Before Adam and Eve sinned, they were two happy, naked vegetarians. Immediately after eating the fruit God commanded them not to eat, they were naked and ashamed. In an effort for them to cover their shame, they sewed fig leaves together. Then they both hid from God until the Lord found them. And in their “new situation” God made the first “blood sacrifice” by killing an animal to make coverings from its skin that would clothe Adam and Eve.

As a consequence of sinning against God, they lost their covering of righteousness - their standing before God, which they had at creation. God therefore had to provide a covering for them. (See Gen 3:21; Isaiah 61:10;Zech 3:3,4;Rev 3:18)

After the fall into sin we see man making an effort to cover his own transgression. In this example, God makes it clear that man’s efforts are not sufficient to cover sin. Only in the shedding of blood can man’s sins be covered.

“And according to the law almost all things are purified with blood, and without shedding of blood there is no remission.” (Hebrews 9:22)

God provided the first sacrifice which was a shadow redemption until the time when God Himself, would be “The Sacrifice” to redeem those who turn to Him for Salvation.

Think about that? …… How God came into our fallen world to pay the penalty for our sins so that not only could we be forgiven, and cleansed, but redeemed back to God to live with Him, forever. Never to be separated by a “sin barrier” again!

Tell me what god worshipped in the world has done what Jesus did for those who worship it? … What god on earth has the power in the shedding of its blood can remove the sins of its worshipers? ….Only a God that left His glory in heaven who put-on skin, so that man can see God. A God who gave His life as a ransom for those who turn to Him to believe and be saved. (John 3:16) 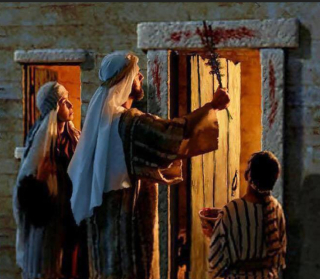 From the Garden to Jesus, the atonement for sin via a blood sacrifice had been established by God.

We learn about the importance of “applying the blood” and in this case it’s the Jews, who were held captive in Egypt. How the blood of the lamb protected the Jews from the death Angel. In God’s final warning to Pharaoh to let His people go, and only the Jews received the instruction from God for protection. They were to place the blood from the lamb on the door posts of their home and the death Angel in seeing the blood would pass by the home. That night, all the first born males of human and animals were killed. Including Pharaoh's son, which broke the Pharaoh emotionally, and moved him to finally release the Jews from his captivity.

Today because of Jesus Christ, God continues to set captives free from Satan, and cover them in His living blood (spiritually) for those who turn to Him to believe and follow.

For when the blood of Christ is applied to the sinner, it opens his ear to the voice of the Lord, which guides what he puts his hands to and the places where he goes. He is no longer his own. He is bought with a price and now he does everything with respect to God and His will.

“Or do you know that your body is the temple of the Holy Spirit who is in you, whom you have from God, and you are not your own? For you were bought at a price; therefore glorify God in your body and in your spirit, which are God’s”
(1 Corinthians 6:19-20)

Do you have the blood covering over your life today? The time is NOW to apply it for yourself, and those you love before it’s to late. Now is the time and once that time runs out, like Noah, in the Ark, the time came when God closed the door to the Ark. Noah and his family were safe inside God’s protection; from the wrath of God upon a world who rejected Him.

Today we have the “Cross” to get inside while there is time. Doing so, gives a “covering” that only Christ can provide for those who come to Him and place His instruction within their hearts.

The Lord is there waiting for you, and I encourage you to not walk - but run into His arms! The Creator of the world and life loved you enough to die for you, and there is no greater love than that!

The Cross is real, and it’s blood stain remains within the soil in where it was shed at Calvary. The advanced technology for DNA blood analysis proves that fact. God died for you because He loves you. Salvation comes only through the ONE who can give you the covering you need to enter Heaven. Don’t reject Jesus, because He alone willed your life into existence. Turn to Him now to preserve it before the door closes. 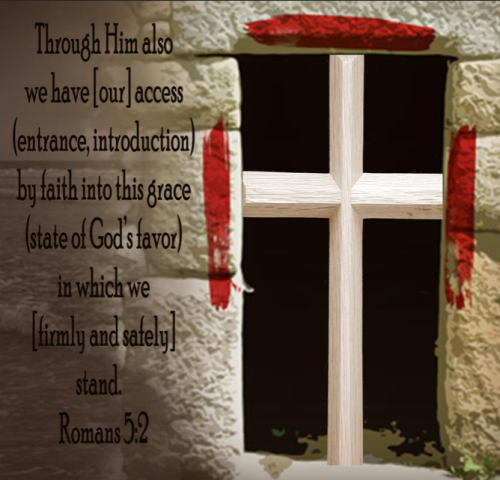